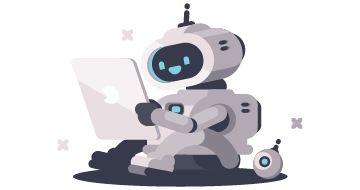 In PubPlus’ Data Science Department, we strive to make life easier with automated tools. That’s why we were so enthusiastic to design and build an infrastructure that could handle both a rapid growth rate for machine learning model training and producing predictions of our key metrics of interest.

Running machine learning models and data processing jobs are time consuming and demanding tasks. Therefore, we needed to plan an approach that enables us to parallelize computations as much as possible while making sure our data is stable enough to have a scalable solution.

The required architecture should allow us to quickly test, evaluate, and compare machine learning models and data processing components. In addition, none of the computational tasks should override output data, this allows us to retroactively run a specific version of the code on an input to inspect bugs and detect performance bottlenecks.

After some research and brainstorming sessions, we’ve chosen the following abstracted entities to be the building blocks of our selected infrastructure:

The tasks are describing code modules that would be executed in a containerized environment using AWS Elastic Container Service (ECS). We’ve selected Docker as our standardized unit of software due to its core benefits, such as:

Each task implements a certain computation or machine learning model independently of other tasks implementation. This includes a preferred programming language, Python or Go are recommended.

Running experiments to evaluate models or code updates becomes as easy as deploying container cluster for each Git branch and inspecting the results on a Jupyter Notebook.

Pseudo code of a task

The pipes are used as the exclusive input and output data units for each task. We chose to store them on Redis in the following key pattern:

Lets take a deeper look into each key component:

We chose Redis as our data storage database due to its ability to cost-effectively handle thousands of ops per second with a low latency.

Listing a ‘pages per visit’ pipe in Redis CLI

Our system needs to collect data across multiple third party sources via APIs. It also needs to process that data and use it for machine learning model training. There are two types to tasks: data collection tasks and data computation tasks. 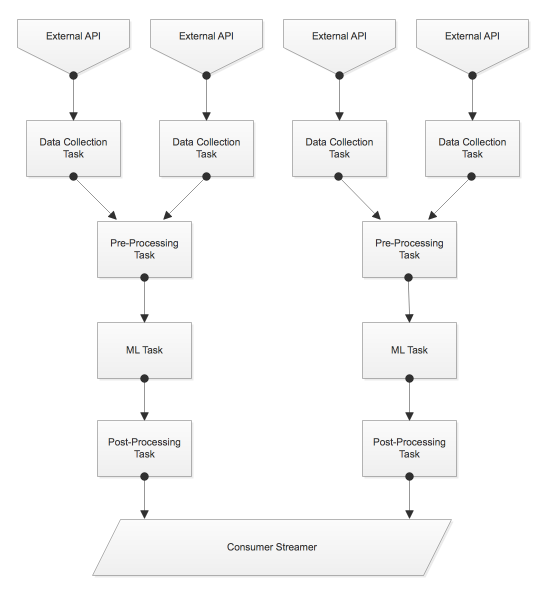 The data collection tasks are triggered at once. The other tasks are executed only after their dependent tasks are completed.

A state consists of the current set of entities and at any given time. The data collection tasks constantly update the state. The state is kept on Redis while a common feature is used for partitioning. For example, a state could be defined as the set of all the current active campaigns.

A wave is an execution of a flow over a state. Each time we want to run a wave, we trigger a scheduled init task that gets the latest state and a given flow. Each entity in the state is compiled of an executable bash script to reflect the order of the tasks and its dependencies as defined by the flow.

During execution, there might be networking issues, dying workers, and/or bugs. As a result, some tasks may fail. We want to avoid sophisticated retry mechanisms in order to keep the architecture as simple as possible while maintaining stable outputs.

In order to achieve this goal, each machine learning task forecasts several predictions for the coming hours instead of predicting only the current hour. This behavior makes the system robust to external API failures and internal cluster issues with a tradeoff of lower confidence interval if predictions for the later hours aren’t replaced by a fresh wave.

Wrapping It All Together

The compiled tasks are saved to a queue and are pending collection by a worker in the containerized environment cluster.

Once the compiled tasks are collected, they are executed with a pending status. The computation won’t start until all the dependent tasks update their status to finished or until a predefined timeout is reached. Once running, the task will get input pipes from Redis, make the computation, save the result as a pipe to Redis, and update its status to finished.

Example of a wave execution over a flow.
Task color represents its status: Pending, Running, and Finished.

Scaling machine learning models is not trivial. Using AWS ECS with Docker as the computation engine and Redis as the data storage platform, we’ve managed to design a system that can execute tens of thousands of machine learning model instances without increasing the total execution time in a cost effective way.

Elad Zalait
Elad leads the Data Science Engineering team at PubPlus, he is dedicated to applying robust machine learning models to state-of-the-art big data architectures. During his free time, Elad likes to travel, dance, and play poker (occasionally winning).
More from Engineering Blog
Gaussian Process Regression With Varying Noise
David Tolpin
In Gaussian process regression for time series forecasting, all observations are assumed to have the same noise....
Technical – A Small Program Can Be a Big Challenge
David Tolpin
A probabilistic model for session depth estimation A good part of today’s internet content is created and...
Bid Selection Under Uncertainty – An Explanation
David Tolpin
The purpose of managing bids is to maintain optimum balance between profit and traffic volume. Achieving this...
Show more
News
ClearPier Acquired PubPlus for $60M
Gil Bar-Tur
ClearPier, one of the largest ad-tech companies in Canada, acquired the Israeli advertising technology company PubPlus for...
PubPlus Certified As Verizon Media Preferred Partner
Adi Harush
PubPlus Joins Verizon Media Native Marketplace Preferred Partner Program PubPlus, the leading revenue attribution platform for content publishers,...
PubPlus Certified As Snapchat Ads Partner
Adi Harush
Reflects PubPlus’ Expertise In Helping Publishers Leverage Snapchat for Profitable Content Distribution TEL AVIV, Israel, Oct. 29,...
How Real-Time Revenue Attribution Unlocks More Revenue Per Visitor
Gil Bar-Tur
This article first appeared on MarTech Series  Today’s most successful online publishers are operating according to a...
PubPlus Ranked Among the 2018 Deloitte Tech Fast 500™ EMEA
Shiri Hershkovitz
Deloitte recognizes PubPlus as one of the fastest-growing technology companies in the Europe, Middle East and Africa...
More News
PubPlus Central
PubPlus Ignites Female Empowerment On Soccer League
Shiri Hershkovitz
PubPlus has been the proud sponsor of the Bnot Yehuda women’s soccer club for over a year....
Takeaways From MediaPost’s Publishing Insider Summit
Adi Harush
MediaPost held their annual Publishing Insider Summit this past weekend in the historic golfing city of Pinehurst,...
A Tale from Vail: An Inside Look at the Digiday Publishing Summit
Omry Aviry
Digiday held their annual Publishing Summit in Vail, Colorado at the end of March. It’s three days...
The Rise Of News Platforms: Are They Worth It?
Omry Aviry
With publishers scrambling around in the wake of Facebook’s algorithm changes last year, a number of previously...
3 Things We Learned From Digiday Publishing Summit US
Shiri Hershkovitz
Subscriptions are hot…but cost a lot. A lot of conversation among publishers revolved around the topic of...
PubPlus, “We Can Tell Anyone If It Was Worth Spending The Money”
Shiri Hershkovitz
Gil Bar-Tur founded PubPlus – an Israeli startup company that is receiving its first exposure here and...
More PubPlus Central
Resource Hub
Publishers Guide to the Galaxy – Camping
Shiri Hershkovitz
Going on a camping trip to enjoy the fresh air? There’s a good way and a bad...
PubPlus’ Best Practice Series: Snapchat Best Practices
Omry Aviry
Social platforms have opened up countless opportunities for publishers, but it can be tricky to navigate their different...
Publishers Guide to the Galaxy – Traveling
Shiri Hershkovitz
Traveling abroad and checking the weather to see what to pack? There’s a good way and a...
Publishers Guide to the Galaxy – Restaurants
Shiri Hershkovitz
Going to a nice restaurant and trying to figure out the best way to pay the check?...
How to Profitably Scale Audience Development Campaigns
Shiri Hershkovitz
Watch how to profitably scale your audience development efforts by understanding your data, connecting your marketing spend...
Clear and Simple: Paid Content Distribution Made Profitable
Gil Bar-Tur
PubPlus’ CEO, Gil Bar-Tur, addressed the elephant in the room and tackled paid content distribution challenges head...
More Resource Hub
Thought Leadership
Bad Actors Went Bargain Hunting On Cyber Monday Too!
Omry Aviry
This article was originally published on Medium, by Clean.io Publishers without protection feel the steep costs of...
A Publishers Guide to Google’s Confirm Click Penalty
Alon Germansky
You’ve most likely heard a thing or two about Google’s confirm click penalty. First spotted several years...
Move Over, Unicorns: Here Comes Social-First Publishers
Gil Bar-Tur
This article first appeared on MediaPost In the tech world, we love to watch the unicorns, those...
Facebook Is Hitting Publishers Where It Hurts: Here’s What To Do
Leytal Ross
This article first appeared on Digiday. It’s no secret that Facebook is cracking down on publishers who...
Why Are Publishers Struggling to Master Paid Content Distribution?
Gil Bar-Tur
This article first appeared on Digiday The advertising environment is transforming, pushing publishers to find new revenue...
Know What You’re Getting Into – Hidden Obstacles of Subscriptions
Adi Harush
Securing Revenue Streams The New York Times, The Washington Post, Wall Street Journal, LA Times and The...
More Thought Leadership