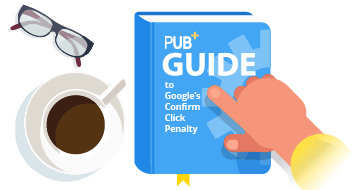 You’ve most likely heard a thing or two about Google’s confirm click penalty. First spotted several years ago, this shadowban has been on the rise – impacting a growing number of publishers using AdSense and AdExchange (AdX).

Let’s jump into exactly what the penalty is, how to know if your ads have been impacted, and the solutions discovered by the PubPlus Lab. The penalty is exactly what it sounds like, when a user is on-site and clicks an ad, they are required to take a second action and re-click before being redirected to the target page. The interstitial “visit site” button will overlay the ad to confirm the user’s intention to click. Since a picture is worth a thousand words, here’s what an ad affected by the confirm click penalty looks like: 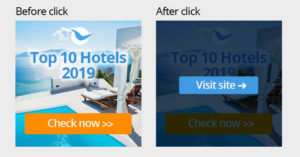 Why is the penalty placed on your ads?

The confirm click penalty, aka double-click AdSense penalty, aka two-click penalty are all ways to reference the same situation. Users are only redirected to the advertiser’s site once they click on an ad for the second time (on the ‘visit site’ button). This penalty doesn’t go without notice from the publishers end; when the two-click verification is implemented, CPMs and revenue quickly plunge.

Many publishers have experienced the wrath of the click penalty at one point or another, as can be attested by publishers comments on Google’s AdSense Help Center. But what triggers it? Invalid traffic, click spam, ad reflow, accidental clicks – or even merely the potential for such. It’s Google; changes happen quickly and can be tricky to track but they’re clear on what invalid traffic is: ‘Invalid traffic includes any clicks or impressions that may artificially inflate an advertiser’s costs or a publisher’s earnings. Invalid traffic covers intentionally fraudulent traffic as well as accidental clicks.‘

As discussed on Reddit’s Ad/Ops board, the “visit site” button is placed on publishers site without notification, when AdSense or AdX detects invalid activity on a publishers site. Publishers that struggle with invalid / accidental clicks on their site have a higher likelihood of experiencing the confirm click penalty.

Notice the dramatic drop in revenue when the confirmation click penalty was issued on the below campaigns:

Our two-cents on the two-click penalty

PubPlus Lab dug right into the situation to get some much-needed insights. We spotted these issues, monitored them, tested solutions and generated learnings from our experience. Please note that this isn’t an official guide on the confirm click penalty; while we can’t guarantee that these methods will work across the board, they’re here to help you, and we’re confident you’ll find it easier to establish your own solutions and insights.

How can you spot the confirm click penalty? At PubPlus, our campaign managers constantly monitor RPM fluctuations in our proprietary platform for an abrupt AdX drop, which can signal the click penalty. Another promising method is to pull AdX reports filtered by AdWords buyers, which can identify sudden drops in CTR. To help narrow down your search, PubPlus Lab uncovered another hidden gem: the confirm click penalty only affects AdWords demand on mobile devices, leaving desktop traffic out of the equation.

The confirm click penalty comes in one shape, but three different sizes – ranging from least to most severe is the ad unit level penalty affecting specific ad units on a page; next in severity is the site penalty, affecting all ad units on a publishers mobile site. The harshest sentence is the AdX and AdSense account level penalty, impacting all ad units, on all sites, connected to the same AdX or AdSense account. We suspect that penalties are initially given on the ad unit level and then spread to the 2nd and 3rd level, and the penalties are similarly removed one level at a time.

Now that we’ve identified how to check if your ads have been struck with the penalty, it’s time to set actions in motion to get those ‘visit site’ interstitials removed.

Nothing is set in stone regarding penalty removal, and remember that getting the ‘visit site’ button off your ads can take anywhere from a few days to several weeks.

Getting hit with the confirm click penalty can turn a profitable quarter into one with low CTRs and consequently low RPMs and revenue. Be proactive about your penalty removal by catching it quickly and adopting strategies to lower your risk. We’ve helped a lot of publishers detect and take action to remove the ‘visit site’ interstitial, effectively and efficiently improving publishers’ results. Our expert team knows how to leverage PubPlus’ real-time capabilities to overcome these changes and alert our clients in real-time. Find out more about PubPlus’ solutions here.

Alon Germansky
Head of Business Intelligence @PubPlus. Alon is an expert in leveraging data into actionable insights for publishers and is a keen follower of ad-tech in all forms. As much as he likes ad-tech, his real passions in life are cooking and traveling.
More from Thought Leadership
Bad Actors Went Bargain Hunting On Cyber Monday Too!
Omry Aviry
This article was originally published on Medium, by Clean.io Publishers without protection feel the steep costs of...
Move Over, Unicorns: Here Comes Social-First Publishers
Gil Bar-Tur
This article first appeared on MediaPost In the tech world, we love to watch the unicorns, those...
Facebook Is Hitting Publishers Where It Hurts: Here’s What To Do
Leytal Ross
This article first appeared on Digiday. It’s no secret that Facebook is cracking down on publishers who...
Why Are Publishers Struggling to Master Paid Content Distribution?
Gil Bar-Tur
This article first appeared on Digiday The advertising environment is transforming, pushing publishers to find new revenue...
Know What You’re Getting Into – Hidden Obstacles of Subscriptions
Adi Harush
Securing Revenue Streams The New York Times, The Washington Post, Wall Street Journal, LA Times and The...
Why You Should Make the Shift to Programmatic Advertising
Omry Aviry
You may have noticed that Buzzfeed created, well, a bit of a buzz in the online publishing...
Show more
Engineering Blog
Scaling Machine Learning Models With Docker, ECS and Redis
Elad Zalait
In PubPlus’ Data Science Department, we strive to make life easier with automated tools. That’s why we...
Gaussian Process Regression With Varying Noise
David Tolpin
In Gaussian process regression for time series forecasting, all observations are assumed to have the same noise....
Technical – A Small Program Can Be a Big Challenge
David Tolpin
A probabilistic model for session depth estimation A good part of today’s internet content is created and...
Bid Selection Under Uncertainty – An Explanation
David Tolpin
The purpose of managing bids is to maintain optimum balance between profit and traffic volume. Achieving this...
More Engineering Blog
News
ClearPier Acquired PubPlus for $60M
Gil Bar-Tur
ClearPier, one of the largest ad-tech companies in Canada, acquired the Israeli advertising technology company PubPlus for...
PubPlus Certified As Verizon Media Preferred Partner
Adi Harush
PubPlus Joins Verizon Media Native Marketplace Preferred Partner Program PubPlus, the leading revenue attribution platform for content publishers,...
PubPlus Certified As Snapchat Ads Partner
Adi Harush
Reflects PubPlus’ Expertise In Helping Publishers Leverage Snapchat for Profitable Content Distribution TEL AVIV, Israel, Oct. 29,...
How Real-Time Revenue Attribution Unlocks More Revenue Per Visitor
Gil Bar-Tur
This article first appeared on MarTech Series  Today’s most successful online publishers are operating according to a...
PubPlus Ranked Among the 2018 Deloitte Tech Fast 500™ EMEA
Shiri Hershkovitz
Deloitte recognizes PubPlus as one of the fastest-growing technology companies in the Europe, Middle East and Africa...
More News
PubPlus Central
PubPlus Ignites Female Empowerment On Soccer League
Shiri Hershkovitz
PubPlus has been the proud sponsor of the Bnot Yehuda women’s soccer club for over a year....
Takeaways From MediaPost’s Publishing Insider Summit
Adi Harush
MediaPost held their annual Publishing Insider Summit this past weekend in the historic golfing city of Pinehurst,...
A Tale from Vail: An Inside Look at the Digiday Publishing Summit
Omry Aviry
Digiday held their annual Publishing Summit in Vail, Colorado at the end of March. It’s three days...
The Rise Of News Platforms: Are They Worth It?
Omry Aviry
With publishers scrambling around in the wake of Facebook’s algorithm changes last year, a number of previously...
3 Things We Learned From Digiday Publishing Summit US
Shiri Hershkovitz
Subscriptions are hot…but cost a lot. A lot of conversation among publishers revolved around the topic of...
PubPlus, “We Can Tell Anyone If It Was Worth Spending The Money”
Shiri Hershkovitz
Gil Bar-Tur founded PubPlus – an Israeli startup company that is receiving its first exposure here and...
More PubPlus Central
Resource Hub
Publishers Guide to the Galaxy – Camping
Shiri Hershkovitz
Going on a camping trip to enjoy the fresh air? There’s a good way and a bad...
PubPlus’ Best Practice Series: Snapchat Best Practices
Omry Aviry
Social platforms have opened up countless opportunities for publishers, but it can be tricky to navigate their different...
Publishers Guide to the Galaxy – Traveling
Shiri Hershkovitz
Traveling abroad and checking the weather to see what to pack? There’s a good way and a...
Publishers Guide to the Galaxy – Restaurants
Shiri Hershkovitz
Going to a nice restaurant and trying to figure out the best way to pay the check?...
How to Profitably Scale Audience Development Campaigns
Shiri Hershkovitz
Watch how to profitably scale your audience development efforts by understanding your data, connecting your marketing spend...
Clear and Simple: Paid Content Distribution Made Profitable
Gil Bar-Tur
PubPlus’ CEO, Gil Bar-Tur, addressed the elephant in the room and tackled paid content distribution challenges head...
More Resource Hub